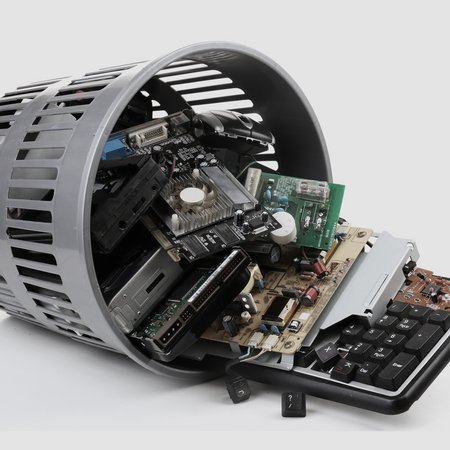 When someone says that today we produce far too much waste this someone is right. Sadly in more than one way. For once there are many cheap products overfilling shop shelves that actually nobody needs. Often enough their design was economised as well. Secondly there are a lot of products that turn themselves into waste after a certain timespan – they suddenly no longer function. Products refuse to work, often enough not only because some parts are worn out but because this effect is intended. This is called planned obsolescence. One could only guess that if the achievements of modernity had already existed in Ancient Rome the famous Coliseum would have tumbled down after a few years so someone had to build a new one. That has absolutely nothing to do with sustainability

But one by one: Obsolescence means a product becomes out-dated. This can happen as a natural process or artificially. There are different kinds of obsolescence, here are the most important ones:

Planned Obsolescence
This kind of obsolescence is often part of a marketing strategy. Even during the fabrication weak spots are implemented to make a product’s lifespan, „manageable“, to make sure that the customer has to buy a product in a short time.  Wear and tear is also taken into account to arouse the customer’s wish for a new flawless product.

Functional Obsolescence
Should a product no longer be used because of current requirements, one speaks of functional
obsolescence. For example, computer operating system can become obsolete if a new and desperately needed software will not work impeccably with it. The same can for example happen to printers when there is no printer accessories.

Psychological Obsolescence
With this kind of obsolescence a still impeccably working product nonetheless becomes out-dated in the eye of a customer, as it no longer corresponds to a certain zeitgeist. It is no longer up to date. This phenomenon can especially be observed in constantly changing fashion trends. Technical development causes psychological obsolescence as well, for example when analogue photography was replaced by digital photography. Or let us take a look at mobile phones: The knowledge that today’s news is tomorrow’s old hat can be applied to mobile phone technology. Even though the older device might function properly, many people buy a new phone believing that an up to date one should be better.

Obsolete Obsolescence
Even though the planned use of obsolescence might improve sales, economic growth should not be the base of good design for all times. Here one thing should always be made sure: quality before quantity.

Even though today we can recycle many materials, this nonetheless uses lots of energy that could be put to better use elsewhere. And not all material is recyclable as can be seen with so-called rare metals. These substances are not only rare – as their name tells – but mostly cannot be recycled at all. Among the rare metals are molybdenum, niobium and indium. They are essential for many processes, and if they are missing complete production flows can be brought to a halt. Especially innovative sectors are in need of rare metals that are used for fuel cells, computers, hybrid cars or photovoltaic cells.

In the early days a man used his razor all his life: he fostered and treasured it with love and passion and then passed it on to the next generation. The new trend to use disposable products that started in the 1950s also was the birth of the plastic one-way razor, colourful and sold 20 in a package. Of course, nobody wants to turn back time so that before every shave a man has to sharpen a razor blade for at least ten minutes. Finding a middle ground between both extremes is the sensible thing to do. The way into the future is not “disposable”. Planned obsolescence is quite an insane idea and should be banished in business in the next years to come. It was never up to date and never will be. The ruthless urge to enhance sales figures no matter what the cost not only burdens the environment but also weakens the customer’s trust in the brand.

What might seem as an economic success can become a boomerang turning towards its sender, resulting in financial losses and at worse the end of a brand.

The ecological awareness of consumers and societies is constantly growing. The times of fast-food mentality are slowly but surely drawing to an end. Independent control mechanisms such as consumer organisations as well as the internet make the quality of products far more transparent. Companies only trying to make fast money on the backs of the environment and consumers will no longer have any chance on the market in the long term. At least this is what we wish for. Warner Philips, grandson of the Philips electronic concern founder, gave a positive signal. Together with the Lemnis company he developed a new LED light that has a lifespan 25 times longer than a traditional light bulb – and thereby is 90 % more efficient. This is even more important seen in the context of 1924 when the so called Phoebus cartel, an association of international light bulb fabricators, decided to restrict a bulb’s burning time to 1,000 hours even though a longer burning time was technically possible. There were regular tests to make sure those restrictions were observed. Cartel members whose light bulbs burned longer than 1,000 hours were sanctioned with severe penalties. Even though the cartel was officially liquidated in 1941 the idea became more popular than one would care for.

But back to more positive things:
To design long living products one has to observe their function over a long term. Only tests under constant stress show a product’s weak point. A mattress has to provide a reliable stability and comfort not only once but thousands of times. A team of test sleepers is not even necessary for that: It can be simulated equally well with a computer or tested with machines placing pressure on the mattress. When the weak spots are found they can be remedied by optimising the construction or the material. In general high quality materials are very suitable to confirm a customer’s choice and to strengthen his or her trust in a brand. Another possibility to make a product last longer is to make sure the wearing parts can be replaced. No one thinks his new car is fit only for a knacker‘s yard when for the first time just the brake pads have to be exchanged. What might sound self-evident at this point is actually non-existent for many products. For example, the rechargeable batteries of many products cannot be replaced, therefore making it necessary to buy a new device only because this small part is defect. In conclusion we can say there are three possibilities for a product’s better longevity:

Or to say it in better words: Away from one-way is the way!

If you need further information or picture material, you can also call us or use our contact form.

This website uses cookies. Those have two functions: On the one hand they are providing basic functionality for this website. On the other hand they allow us to improve our content for you by saving and analyzing anonymized user data. You can redraw your consent to using these cookies at any time. Find more information regarding cookies on our Data Protection Declaration and regarding us on the Imprint.